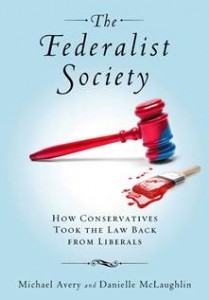 Over the last thirty years, The Federalist Society for Law and Public Policy Studies has grown from small group of disaffected conservative law students into an organization with extraordinary influence over American law and politics.  Unknown to the average citizen, this group of intellectuals managed to monopolize the selection of federal judges, take over the Department of Justice, and control legal policy in the White House.  How did this happen?  How did right conservative professors with radical ideas move their theories into the mainstream of legal thought?  How did Federalist Society members shape national policy for the “War on Terror,” reverse the Supreme Court’s direction on civil rights, chip away at a woman’s right to choose an abortion, win free speech rights for corporations to bankroll elections, and leave the United States as one of only two countries in the world that have not signed the U.N. Convention on the Rights of Children?  How has this group garnered broad acceptance of the idea that we should interpret the Constitution according to its original eighteenth century meaning, rather than as a “living” document? This book goes behind the surface of legislative and court battles to explain how law is really made.  It’s about how ideas and ideology drive law, policy and politics.  And what both conservatives and liberals alike can learn from the rise of the Federalist Society.

Read the Table of Contents